“No one really knows what Jesus looked like either, but everyone thinks they know.”

I had no idea how appropriate this closing line from my most recent post would be in describing the wonky cable news conversations of this holiday season. Nor did I realize that the above painting could have anything to do with cable news or Santa Claus. I’ll get back to the painting. But first:

As you may know, Fox News host Megyn Kelly exasperatedly announced on air recently that “Santa just is white,” then added that of course Jesus was too. In response, everyone from comedians to archaeologists pointed out that this was genetically unlikely for either the historical Jesus (Middle Eastern Jew) or St. Nicholas (Turkish).

This isn’t a new conversation, and if that were all that had happened, I wouldn’t bring it up. But in a subsequent interview with The Washington Post, scholar Reza Aslan pointed out that it’s useful to differentiate between Jesus of Nazareth, the person who existed in history, and Jesus Christ, the divine religious figure whom Christians seek to emulate. Aslan avoids addressing Kelly’s unsettling implication that Jesus and Santa should be white for everyone, but readily agrees that “[Megyn Kelly’s] Christ is white…That’s the entire point of the Christ.” And then he goes on to elaborate on how people all over the world create images of Jesus and his family that look just like them.

The history of art supports Aslan’s point, because if we took paintings at face value, we would believe that Jesus was born in a miniature Roman villa, and the Annunciation took place in a fifteenth-century Dutch parlor. Also, Mary was blond and Bethlehem looks like an Italian seaport.

(By the way, if you feel like jumping farther down that rabbit hole, try Leo Steinberg’s weird but rigorous book The Sexuality of Christ in Renaissance Art and Modern Oblivion, in which the author notes—among many other things—how Renaissance depictions of the naked Jesus show him uncircumcised, an unlikely state of being for a Jewish man. In other words, the Christian artists were very invested in painting a Christ who looked EXACTLY like them.)

The sweeping liberties taken with depictions of Jesus, his mother, and his surroundings lead me back to the painting at the top of this page.

Henry Ossawa Tanner was an African-American artist who grew up in Philadelphia but spent most of his life as an expatriate in France. He was also a religious man, the son of an African Methodist Episcopal bishop. Yet the Virgin Mary he depicts in The Annunciation is neither a black Philadelphian girl nor a French peasant in a dilapidated barn. Nor is she a noblewoman in gilt robes, painted in the Western European tradition. She’s a barefoot, confused Middle Eastern teenager. 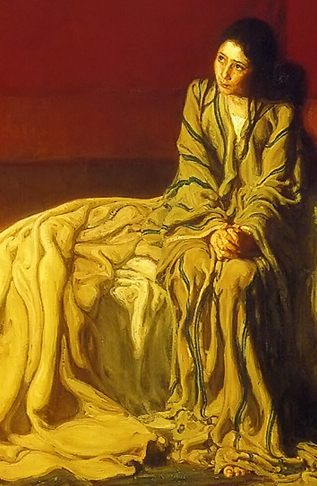 I love the look on her face. It’s perfectly appropriate to the actual text in Luke 1: 26-34:

26 And in the sixth month the angel Gabriel was sent from God unto a city of Galilee, named Nazareth, 27 To a virgin espoused to a man whose name was Joseph, of the house of David; and the virgin’s name was Mary. 28 And the angel came in unto her, and said, Hail, thou that art highly favoured, the Lord is with thee: blessed art thou among women. 29 And when she saw him, she was troubled at his saying, and cast in her mind what manner of salutation this should be. 30 And the angel said unto her, Fear not, Mary: for thou hast found favour with God. 31 And, behold, thou shalt conceive in thy womb, and bring forth a son, and shalt call his name JESUS. 32 He shall be great, and shall be called the Son of the Highest: And the Lord God shall give unto him the throne of his father David: 33 And he shall reign over the house of Jacob for ever; and of his kingdom there shall be no end. 34 Then said Mary unto the angel, How shall this be, seeing I know not a man? 35

(In other words: WHAT IS HAPPENING? WHAT IS THIS THING DOING IN MY HOUSE? HOW WILL I EVER EXPLAIN THIS TO MY PARENTS?)

While Tanner has probably taken some liberties with the décor, his Mary is much closer in mood and ethnicity to what Luke suggests than she is in other famous Annunciations. So why did Tanner paint her this way?

It’s been suggested that as a black man who suffered constant slurs in Philadelphia, he would have been more sensitive to assumptions about race and ethnicity than many of his white colleagues. This may be the case, but I tend more towards attributing Tanner’s concern for the “accuracy” of his religious scenes (he painted many) to his deep familiarity with scripture and his training as a realist painter. In Philadelphia, he studied with famed realist Thomas Eakins, who stressed the importance of depicting things as they are—anatomy, motion, blood and guts, ill-fitting clothing, awkward facial expressions, and so on. Eakins painted almost exclusively contemporary scenes, but when he decided to paint a crucifixion, he dragged some wood to a deserted site, built a cross with a foot ledge, and had a naked friend stand on it with his arms outstretched. The result is both literal and lacking any kind of religious mystery:

Tanner, on the other hand, managed to uniquely balance the physicality of late nineteenth-century American realism with an intense mysticism that was popular among some French painters at the time. In the late 1890s he traveled to Palestine, making many sketches of the landscape and of Jewish individuals in the areas where Jesus would have lived. These later became the basis for many of Tanner’s religious scenes, including this one. His Mary is believably Middle Eastern and Jewish; she’s also believably human, with knobby knees and a candidly bewildered expression. But there is still something amazingly supernatural going on. There is a huge column of light in the room and it’s the angel Gabriel.

Christian writings are not at all in agreement on the physical appearance of angels, though most people tend to accept the popular image of an androgynous humanoid with wings. Tanner’s particular solution is likely drawn from the many biblical comparisons between God’s presence, and God’s words, to light: burning bushes, “the light shines in the darkness,” etc. For the African Methodist Episcopal Church, many of whose congregants (like Tanner’s mother) had once been enslaved, the pillar of fire that led the Israelites across the Red Sea and out of slavery was particularly meaningful. The Quakers, prominent in Tanner’s native Pennsylvania, also saw light as a sign of divine presence.

So, again…no one really knows what Jesus, or his family, really would have looked like. But Henry Ossawa Tanner may have come close.