Ammi Phillips’ Peter Guernsey, the Eye Doctor takes…well, some getting used to. Guernsey’s blue eyes hold our own gazes so steadily that it might be several seconds before we notice that there’s a disembodied face at the right edge of the picture, and several more before we realize that that in fact there are three people here: the doctor, his patient, (who, in case you’re wondering, is facing cataract removal without the aid of anesthesia), and a third person, pressing the patient’s eyelids wide open.

GAH! WHY WOULD ANYONE MAKE THIS?? That’s many people’s reaction, anyway. But at the time, a portrait like this would have been good for Guernsey’s reputation and status in Amenia, New York, the tiny rural town where he practiced. Unlike today, the social status of an early nineteenth-century doctor was flexible, to say the least. There were licensing standards in Europe, but any man in the United States could be a doctor simply by calling himself one. One nineteenth-century traveler wrote of visiting a town where residents had

stiled [the local shoemaker] doctor…happening two years agoe to cure an old woman of a pestilential mortal disease, he thereby acquired the character of a physitian, was applied to from all quarters, and [found] the practice of physick a more profitable business than cobling…

This was pretty terrifying to a lot of people then (not just to us now), so it’s unsurprising that medical men like Guernsey had something to prove with their public images. But what a country doctor needed to prove, and to whom, was very different from what we see in his urban counterparts.

Phillips bluntly depicts Guernsey’s professional practice in a way that just didn’t happen in the medical portraiture of the urban elite, as you can see from John Neagle’s portrait of Dr. William Potts Dewees, who was professor of obstetrics at the University of Pennsylvania. His hair tousled just so, the doctor is accompanied not by forceps or anatomical models, but a large classical column and his extensive art collection. In an urban setting where education and expensive taste were primary factors in determining status, Dewees aspired to be accepted by elite politicians, shipping magnates, and independently wealthy gentlemen.

Guernsey, on the other hand, is successful but practical, comfortable but not extravagant. This is a man who eats well but isn’t about to come down with a case of gout. Even the clear, linear style associated with itinerant painters is suited to someone striving for the “middling” rural ideal that many people in the Jacksonian era admired. Guernsey seems to have understood that his social status and his value to the community he served lay not in Old Master paintings or fine furniture, but in whether or not he could successfully remove his neighbors’ cataracts and set their broken bones. Even the most well-to-do residents of Amenia would have been farmers and craftsmen who, from time to time, desperately needed Guernsey’s services to be able to do their jobs.

Being a member of the rural elite or middle class wasn’t the same as being a fancy urban gentleman. Instead of picturing his subject lounging against a column in front of a plush velvet curtain—decadent by country standards—Phillips paints the doctor as a skilled craftsman, performing honest handiwork that could easily be understood and admired by other skilled workers. Phillips was a successful skilled artisan, too, and would have identified with the doctor and known what provoked the esteem of local clockmakers, jewelers, and smiths. Indeed, Guernsey’s direct gaze and delicate grasp of his cataract knife are awfully similar to the pose of an artist painting a self-portrait. But instead of brushing in the form of his own eyes onto a canvas, he’s about to press a sharp blade into someone’s eyeball.

It was common in pre-Civil War times for rural doctors to be depicted as men of action, in the midst of performing their craft. However, portraits like Jacob Maentel’s (above) that focused on a doctor’s use of medications seem to have gone out of fashion around the 1830s. Why? Probably due to the deepening distrust of doctors who relied on traditional practices like bleeding their patients with leeches and dosing them with “emetics” (solutions that either made patients vomit spectacularly, or caused everything to come out the other end). Also to blame is the scary proliferation of quack medicines—tonics claiming to cure anything and everything. P.T. Barnum, famous for his statement that “there’s a sucker born every minute,” began his career selling Proler’s Bear Grease, which purported to cure baldness but didn’t. Other tonics sold by peddlers made claims for the cure of ague, dropsy, bilious liver, cancer, mortality(!), dysentery, indigestion, and hysteria—sometimes all at once. Not a few patients began to realize that their recoveries might be due less to emetics or tonics than to the healing processes of time. One astute medical writer pointed out how “nature can not build a railway, but she can very often cure a disease.”

Tellingly, critics in the media seem to have directed their anger specifically at the treatment of illness, not at the practice of surgery. Apparently, everyone understood its necessity, in great part because they could see it: any observer could watch a surgery and deduce its truth value on his or her own. Surgery was usually done in the home (often on the kitchen table, where everyone had just eaten their breakfast), and commonly watched by anyone who happened to be present. That’s what we see here. The fingers holding open the eyes of Dr. Guernsey’s patient could as easily belong to Guernsey’s wife, son, or neighbor as they could to a medical apprentice. 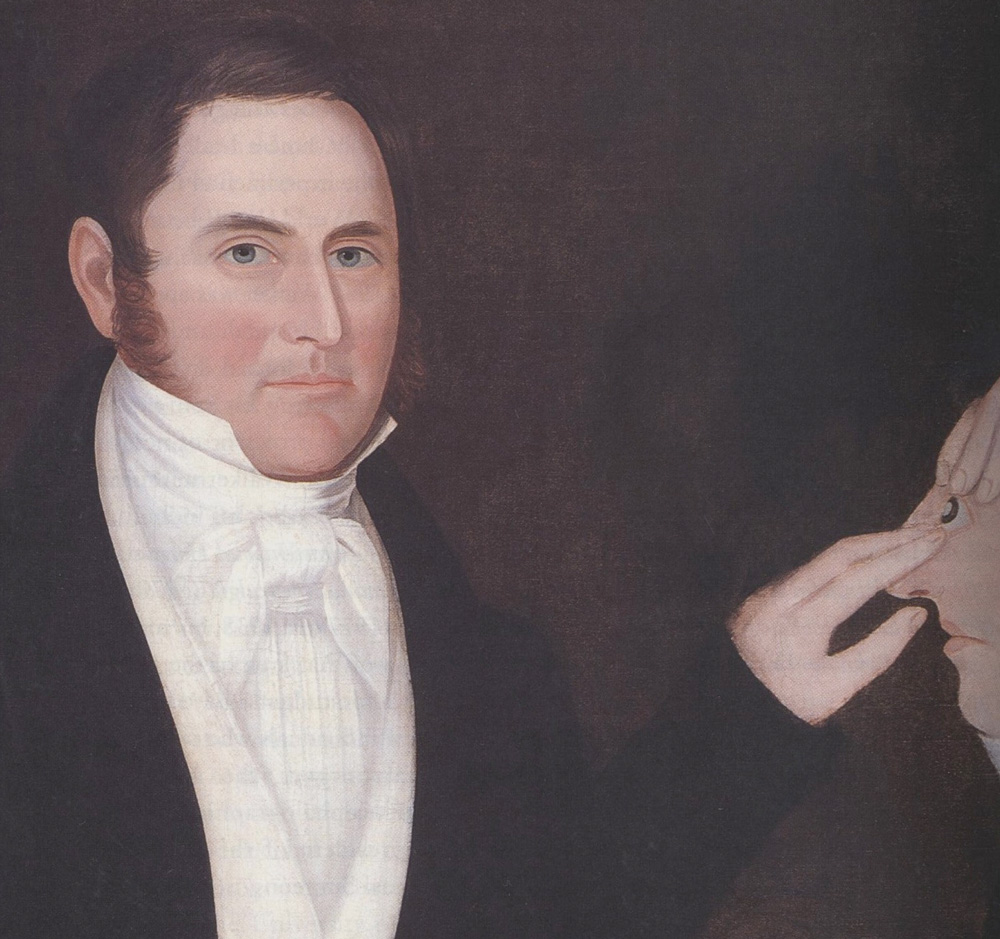 Of course, this still doesn’t explain why both doctor and patient seem utterly calm—proud, even. Guernsey is about to cut into the surface of his patient’s eyeball, break up the lens into tiny pieces, and remove it. The patient will be able to feel all of this. Why isn’t everybody freaking out?

Well…this was 1828. There wasn’t any anesthesia beyond a swig of brandy, so surgery in any form was excruciating for a patient. Therefore, a surgeon empathetic to his patients’ pain would have been an ineffective, hysterical mess. Pain was an expected part of life, and steeling oneself to its effects—as a doctor or a patient—was admired as fortitude. One young doctor’s diary emotionally describes how his patients’ cries “would have rent the heart of steel, and shocked the insensibility of the most hardened assassin and the cruelest savage,” but ten years later, his entries describe wounds, symptoms, and parts in a manner so disembodied that they don’t seem to belong to actual people at all.

I began looking into Peter Guernsey, the Eye Doctor simply because it was so baffling and bizarre. What I see now is this: a patient with fortitude and the hope that he will see again; the hand of a neighbor, showing that surgery was a communal endeavor; and an honest man of skill and character who is successful and admired because the results of his practice are, literally, right before his patients’ eyes.

For more on Phillips, see Revisiting Ammi Phillips: Fifty Years of American Portraiture (Museum of American Folk Art, 1994) by Stacy C. Hollander. I’d also like to thank Paul D’Ambrosio, President and CEO of the Fenimore Art Museum, whose delightful blog tipped me off to the existence of this painting a while back.